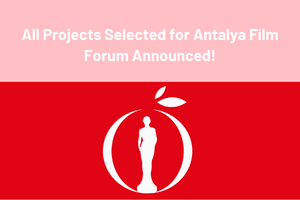 The Antalya Film Forum has unveiled the 15 projects selected to pitch at three of its platforms, namely the Features Work in Progress, Documentaries Work in Progress and Series / Short Series Platforms. The Film Forum — the co-production market and project development platform of the Antalya Golden Orange Film Festival — will take place in Antalya from October 2-4 and online from October 4-6, 2022. Now in its 59th edition, the Festival itself is hosted by the Antalya Metropolitan Municipality with the support of the Turkish Ministry of Culture and Tourism, and will run from October 1-8, 2022.

Five Projects to Compete at Features Work in Progress Platform!

The 26 submissions received for the Features Work in Progress Platform were judged by a preselection committee made up of Çiçek Kahraman, an award-winning film editor and creative editorial consultant for Netflix, Hugo Rosak, who heads the Film Industry Office at the Karlovy Vary Film Festival, and Renan Artukmaç, International Sales Deputy at France TV who has produced and distributed the films of globally recognized directors.

Five Projects to Compete at Documentaries Work in Progress Platform!

Of the 35 projects that applied to the Documentaries Work in Progress Platform, a shortlist of five was drawn up by the preselection committee, which was composed of: Babette Dieu, a documentary programmer for international film festivals and project manager at the EFM Doc Toolbox Program; director Deniz Tortum, whose films and new media work have been shown at myriad festivals, including Venice, SXSW, IFFR, IDFA, Hot Docs and DokuFest; and Elif Ergezen, a documentary director and editor who has served on the documentary advisory committees of various festivals.

Launched three years ago to reflect the growing role and importance of series in the audiovisual industry, the Series / Short Series Pitching Platform seeks to identify new talent and, by providing producers with national and international support, to contribute to the development of original, creative content. This year, 62 submissions were received, from which five projects were selected to pitch at the Platform.

This year, the Series / Short Series Platform’s top prize will be awarded by Netflix Turkey as part of Grow Creative, a program run by Netflix to expand and develop the film and series industry’s talent pool. The Netflix Grow Creative Project Development Support takes the form of TL 100 thousand in cash funding and free accreditation to the Netflix Turkey Project Development Workshop. One of the projects presented at the Series / Short Series Platform will also win the Color Up Color Correction Award.

The Antalya Film Forum juries will be announced in the coming days and their award decisions at a ceremony on October 4, 2022.