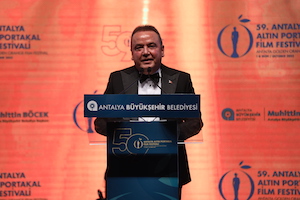 Hosted by the Antalya Metropolitan Municipality with the support of the Turkish Ministry of Culture and Tourism, the 59th Antalya Golden Orange Film Festival kicked off yesterday with the Opening Ceremony at the Antalya Indoor Sports Stadium. Among the highlights of the ceremony was the presentation of Honorary Awards to actors Perihan Savaş and Erkan Can, and of an Achievement Award to actress-painter Zerrin Tekindor. Other memorable moments included the appearance on stage of Ediz Hun and by video link of Filiz Akın, the two actors featured on this year’s Festival poster.

A draw for many members of the Antalya public, the ceremony was attended by Turkey’s Minister of Culture and Tourism Mehmet Nuri Ersoy, Antalya Governor Ersin Yazıcı, Mayor of Antalya and Chair of the Festival Muhitten Böcek, Secretary General of the Antalya Metropolitan Municipality and Executive Director of the Festival Cansel Tuncer and General Director of Cinema Erkin Yılmaz, along with regional mayors, political party representatives and Antalya officials. Also present were members of the Festival juries, the cast and crews of participating films, and myriad names from the world of film and television.

Muhittin Böcek: ‘May we have many more Golden Oranges and many more get-togethers!’

Broadcast live on Halk TV with Nefise Karatay and Yekta Kopan presenting, the evening was introduced by Muhittin Böcek, the Mayor of Antalya and Chair of the Festival.

Ediz Hun: ‘Art and science are like the two wings of a bird. Societies that are able to use both wings will fly and be free.’

This year’s Festival poster is based on a photograph of Filiz Akın and Ediz Hun taken on set while filming the romantic drama, Ankara Express, over five decades ago. Although unable to be in Antalya for health reasons, Filiz Akın sent a video message expressing her thanks and delight at being given the chance to star on the poster. Her co-star, Ediz Hun, joined the audience in person at the ceremony, where Turkish Minister of Culture and Tourism Mehmet Nuri Ersoy gifted him a photograph of Mustafa Kemal Atatürk taken during a visit to Antalya.

Zerrin Tekindor: ‘It’s wonderful to be taking home such a fabulous award.’

This year’s Achievement Award went to the actress and painter, Zerrin Tekindor, whose prolific career has spanned the stage, the small screen and big screen alike. As an actress, she has always shown a remarkable talent for building a powerful and affecting connection with the audience, and for fully investing herself in every role of every stage play, television series or film she takes on. Zerrin Tekindor received her award from Mayor of Antalya, Muhittin Böcek.

Erkan Can: ‘Long live the arts!’

Of this year’s two Honorary Awards, the first was given to Erkan Can, who began his acting career on the stage at the age of 16 before later breaking into film and television. An actor of extraordinary versatility, he has the gift of elevating any project he is a part of, and over the years has created some memorable characters through his impressive performances. These have won him two Golden Oranges for Best Actor, the first with On Board, and the second with Takva: A Man’s Fear of God. Mayor of Antalya Muhittin Böcek presented Erkan Can with his award.

Perihan Savaş: ‘This award takes me back 48 years.’

The second of the two Honorary Awards went to actress Perihan Savaş, who began her career on the stage as a child and quickly progressed to become a star of the latter years of Yeşilçam’s golden era. Standing out for her portrayal of authentic female characters, she picked up a Golden Orange for Best Actress with the 1974 film, Bedrana. She has been an enduring presence through periods of change and regeneration in Turkish cinema, making her mark with a wide variety of roles. Away from film and theatre, she has also become a much sought-after name in television with performances in numerous drama series. Perihan Savaş received her award from the Governor of Antalya, Ersin Yazıcı.

Setting out from the premise that many of Turkish cinema’s classics are literary adaptations, the Golden Orange Film Festival this year launched the Adapted Screenplay Competition, and the very first winners were announced at the Opening Ceremony. Decided on by a jury made up of screenwriter-producer Aslı Özge, actor-director-writer Ercan Kesal and author Müge İplikçi, the competition awards were announced by Aslı Özge. The Best Screenplay Award was won by Burcu Aykar’s “When the Shadows Retreat”, based on Cahide Birgül’s novel of the same name, while the Special Jury Prize was awarded to Elif Refiğ and Murat Mahmutyazıcıoğlu’s “The Lonely”, an adaptation of Zaven Biberyan’s novel of the same name.

The evening, which also included an introduction to the films in the Festival program and the competition juries, was rounded off with a concert by Turkish singer-songwriter Mustafa Sandal.