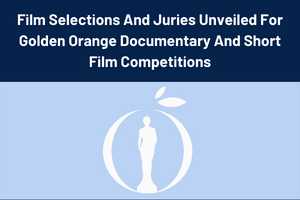 The film selections have been announced for the National Documentary and Short Film Competitions of the 59th Antalya Golden Orange Film Festival, which is to be hosted by the Antalya Metropolitan Municipality with the support of the Turkish Ministry of Culture and Tourism from October 1-8, 2022. A preselection committee composed of Assoc. Prof. Dr. Ahmet Gürata, Senem Erdine and Engin Palabıyık shortlisted 10 films for the Documentary Film Competition and 12 for the Short Film Competition.

The National Documentary Film Competition jury will decide on the winners of the Best Film Award, worth TL 50 thousand, and the Special Jury Prize, worth TL 20 thousand. Of the three jury members, director-screenwriter Ceylan Özgün Özçelik is currently working on the post-production of her latest film, a hybrid documentary titled Nothing Is Normal (Hiçbir Şey Normal Değil). She was an artist-in-residence at the Medienboard Berlin Brandenberg and received a San Francisco SFFILM screenwriting grant with her project, Witch Trilogy (Cadı Üçlemesi). Her shorts and feature films have screened at more than 100 international festivals including the Berlinale, SXSW, RIDM, São Paulo, DokuFest, London, Ann Arbor and Sitges. Fellow jury member Elif Ergezen is a director known for the documentaries, Death of the Poet (Şairin Ölümü) and Elif. Besides directing, she has edited numerous documentary films, served on the documentary advisory boards of various festivals and, for the last 15 years, led philosophy and film workshops for children. The third jury member, veteran documentary maker Hilmi Etikan, founded the film departments of leading institutions such as İFSAK (Istanbul Amateur Photography and Film Society) and TÜRSAK (Turkish Cinema and Audiovisual Culture Foundation). He also set up the DİSK (Turkish Confederation of Progressive Trade Unions) Film and Photo Center, which he went on to direct for many years. A former member of the board of directors of the BSB (Turkish Association of Documentary Filmmakers), he has lectured at different universities and contributed to the development of film culture through the many training seminars he has arranged, as well as organizing and serving on the jury of national and international film festivals.

A jury of three will judge the National Short Film Competition line-up and pick the winners of the TL 20 thousand Best Film Award and TL 10 thousand Special Jury Prize. Of the three, actress Ezgi Mola is widely known for the television series, Cops and Robbers (Hırsız Polis), and the drama feature, The Woman of My Life (Hayatımın Kadınısın). Her screen performances include starring roles in the series Welcome My Friend (Arkadaşım Hoşgeldin) and the feature films, Husband Factor (Kocan Kadar Konuş), Maide’s Big Day (Maide’nin Altın Günü) and Money Trap (Organize İşler Sazan Sarmalı). On stage, her most recent performance has been as the Queen in Alice the Musical. She is joined on the jury by film critic-screenwriter-director Melikşah Altuntaş, who has edited and written on film for a host of magazines and newspapers, including a 15-year spell at Bant Mag magazine. He has also written and edited several television series, shows and web series. He made his directorial debut in 2012 with the horror feature, The Invisibles (Görünmeyenler) and co-wrote the 2020 comedy feature, The Way We Are (Biz Böyleyiz). The third member of the jury, director-screenwriter Nazlı Elif Durlu, won national and international festival awards for her shorts, Trust Me (Güven Bana), Later (Sonra), and The Horse and the Nightingale (Düldül ve Bülbül). She wrote the Almost segment, directed by Hany Abu Assad, of the ensemble film, Do Not Forget Me Istanbul and made her feature debut in 2021 with Zuhal. After premiering at Tallinn Black Nights, the film went on to win Best Actress at the Golden Orange Film Festival, and the Seyfi Teoman Best Film, Best Screenplay and Best Editing Awards at the Istanbul Film Festival.