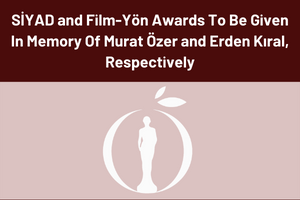 Tribute will be paid to two leading figures of the Turkish film industry who have died this year in the awards of the 59th Antalya Golden Orange Film Festival National Feature Film Competition. The Turkish Film Critics’ Association (SİYAD) Best Film and Turkish Film Directors’ Association (FİLM-YÖN) Best Director Awards will be given in memory of film critic Murat Özer and veteran director Erden Kıral, respectively. Running from October 1-8, 2022, the Festival is hosted by the Antalya Metropolitan Municipality with the support of the Turkish Ministry of Culture and Tourism.

At this year’s Antalya Golden Orange Film Festival, the Turkish Film Critics’ Association will dedicate its SİYAD Best Film Award to the memory of Murat Özer, a film critic who died in March of this year having served as chair of the association for one term. Murat Erşahin, Olkan Özyurt and Uğur Vardan, three of Özer’s closest friends, will make up the SİYAD jury.

Murat Özer studied at the Marmara University Press Academy, the Boğaziçi University Department of Philosophy and Istanbul University History of Art Department. He began his career as a film critic while still a student in 1990, taking a job at the magazine, 2000’e Doğru. He remained committed to watching films and writing about the industry for the length of his life. He wrote film reviews for myriad newspapers, magazines and internet publications, as well as producing and advising on numerous film programs for television. He also edited Ali Özgentürk and Işıl Özgentürk’s books on film. Most recently, he continued to write for Arka Pencere (Rear Window), the monthly magazine he launched years earlier. Cinema played a lead role in the life of Murat Özer, who will be remembered at the 59th Antalya Golden Orange Film Festival with the Film Critics’ Association SİYAD Best Film Award in recognition of the many years of hard work he put into the association.

The Turkish Film Directors’ Association (FİLM-YÖN) Best Director Award will this year be given in memory of veteran director Erden Kıral, who died in July. The FİLM-YÖN jury will comprise Feyzi Tuna, Görkem Yeltan and İsmail Güneş.

Erden Kıral began his filmmaking career as a university student, working as an assistant to directors such as Yılmaz Güney, Bilge Olgaç and Osman Fahir Seden. Two years after his debut feature, The Canal (1978) (Kanal), he made a screen adaptation of Orhan Kemal’s eponymous novel, On Fertile Lands (Bereketli Topraklar Üzerinde), which was named Best European Film at the Strasbourg Film Festival. A Season in Hakkari (Hakkari’de Bir Mevsim), another screen adaptation, this time of a novel by Ferit Edgü, was banned in Turkey during a period of martial law, but nonetheless won Silver Bear and FIPRESCI Awards at the Berlin Film Festival. His 1984 picture, The Mirror (Ayna), screened at Venice and Dilan (1987) in the Directors’ Fortnight section of the Cannes Film Festival, while Hunting Time (1988) was a nominee for the Golden Bear at Berlin. Hunting Time (Av Zamanı) later went on to pick up Best Film and Best Director Awards at the 30th Antalya Golden Orange Film Festival. A member of the Academy of Arts in Berlin, where he lived for a time, director and screenwriter Erden Kıral leaves behind a legacy of remarkable films that include Everything Unsaid about Love (Aşk Üzerine Söylenmemiş Her Şey), The Blue Exile (Mavi Sürgün), The Hunter (Avcı), On the Way (Yolda), Conscience (Vicdan), Load (Yük) and The Night (Gece). Erden Kıral was recognized with a Golden Orange Lifetime Achievement Award and will be remembered at the 59th Antalya Golden Orange Film Festival with the FİLM-YÖN Best Director Award.