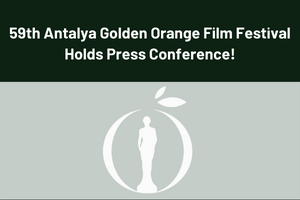 A press conference was held in Antalya today for the 59th Antalya Golden Orange Film Festival, which will take place from October 1-8, 2022. The event is hosted by the Antalya Metropolitan Municipality with the support of the Turkish Ministry of Culture. The press conference was attended by Mayor of Antalya and Festival host Muhittin Böcek, executive director of the Festival and ANSET general manager Cansel Tuncer, festival director Ahmet Boyacıoğlu and actress Damla Sönmez on behalf of the Antalya Film Forum. Moderated by Damla Sönmez, the meeting provided a platform to announce details around the 2022 Festival poster, this year’s Honorary Awards, new developments at the Festival and the program.

Mayor Böcek thanked in advance all the artists and filmmakers, industry representatives and workers who would, once again, be adding significance to the Festival with their presence. He went on to talk about this year’s poster and honorary awards and announced: ‘I must express my gratitude to Filiz Akın and Ediz Hun, two legends of Turkish cinema, for providing the faces of our Festival poster this year. I also wish many more years with the arts to Perihan Savaş and Erkan Can, the recipients of our honorary awards, and to Zerrin Tekindor, who will be given the Festival’s Lifetime Achievement Award.’

Honorary Awards to Go to Perihan Savaş and Erkan Can, and Achievement Award to Zerrin Tekindor!

On the opening night of the 59th Antalya Golden Orange Film Festival, Honorary Awards will be presented to the actress, Perihan Savaş, and actor, Erkan Can. Savaş has brought powerful performances to myriad films, among them Süreyya Duru’s “Bedrana” which won her a Golden Orange for Best Actress in 1974.  Appearing in many of Turkish cinema’s influential films over the last three decades, Can has picked up two Golden Orange Best Actor Awards during his career, the first in 1999 for “On Board”, and the second in 2006 for “Takva: A Man’s Fear of God”. Separately, the Festival’s  Lifetime Achievement Award will be given to the prolific painter and actress, Zerrin Tekindor, who has starred in an enormous diversity of roles on stage, on television and on the big screen.

“New Generation Film School” Films to Screen at the Festival!

Spearheaded by the Antalya Metropolitan Municipality with funding from the Dutch Embassy Human Rights Program, the “New Generation Film School” project seeks to support young women students who want to make a career in film. Speaking about the school, Cansel Tuncer said: ‘The project is designed to encourage young women students studying at the relevant faculties of all universities in Turkey to make films about issues such as gender equality and women’s rights. The applications sent in to the project were judged by a committee made up of academicians from Bitlis, Mersin, Van and Akdeniz Universities. Five projects were selected and the students attached to them went through a constructive training and workshop process with a team of film professionals before making their films. We are delighted to be screening these films at the Festival on October 2nd. It is really important for us to give encouragement and visibility to young women students with an interest in filmmaking.’ The New Generation Film School project provided students with all the crew and technical equipment needed to make their films. Members of the all-women project jury were Bennu Yıldırımlar, Pelin Batu, Belçim Bilgin, Ayşe Erbulak Özgürdal, Sepin Sinanlıoğlu, Gözde Kural and Şebnem Burcuoğlu.