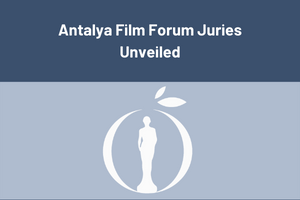 The various juries have been announced for the Antalya Film Forum, the co-production market and project development platform of the 59th Antalya Golden Orange Film Festival, which is to be hosted by the Mayor of Antalya, Muhitttin Böcek, with the support of the Turkish Ministry of Culture and Tourism.

The Antalya Film Forum will take place from October 2-4, 2022 in Antalya, and online from October 4-6. The juries will judge a total of 27 projects selected from the 206 submissions received this year.

The nine projects shortlisted for the Pitching for Feature Films in Development Platform will be presented to a jury made up of producers Antonio Saura and Selin Vatansever Tezcan, and funding advisor Teresa Hoefert de Turégano. A board member of the European Film Academy and director of Latido Films, Antonio Saura has produced or co-produced more than 10 award-winning films, among them “Goya, Carrière and the Ghost of Buñuel”. Producer of the narrative drama, “Saf”, which world premiered at the Toronto Film Festival, Selin Vatansever has since 2021 been director of m2 Film Lab, a project development platform that came about with the support of Film Independent/Global Media Makers. Teresa Hoefert de Turégano, who runs various international initiatives such as the Germany-Turkey co-production fund and international residency programs, is a funding advisor for international co-productions and documentary and experimental projects at the Medienboard Berlin-Brandenburg.

Five projects will compete at the Features Work in Progress Platform, which provides funding and networking support to films that have largely finished shooting. Making up the jury are: Anna Hoffmann, the founder of documentary film magazine DOX and programmer and program manager for the Berlinale Forum since 2001; producer and founder of Heimatlos Film Dilek Aydın, whose producer credits include “Ghosts”, which won Best Film at the Venice International Critics’ Week, and “Mimaroglu: The Robinson of Manhattan Island”, which world premiered at Visions du Réel; and Nathalie Jeung, who took over as head of international sales at Kinology in 2022 after 13 years as senior sales director at Le Pacte.

A line-up of five projects will pitch this year at the Documentaries Work in Progress Platform, which supports projects that have either reached the end of shooting or are in post-production. The jury for this platform is comprised of: Aurélien Marsais, a member of the selection committee for Visions du Réel and programmer for the online documentary platform, Tënk.fr, who is based between Geneva and Brussels; Charlotte Reekers, a program consultant for industry events such as IDFA, EFM, The Gotham, Black Film Space and Sheffield DocFest; and Zeynep Güzel, a former executive of the New Film Fund — Turkey’s first independent documentary support initiative — and director of the Doc Station strand of Berlinale Talents since 2021.

Three projects will compete for the Antalya Film Forum’s Sümer Tilmaç Antalya Film Support Fund, which is awarded to a single Turkish feature film project that shoots at least two-thirds of its content in the city of Antalya and retains the same proportion of Antalya scenes in the final cut. Making up the jury are writer, director and drama consultant Deniz Akçay, writer, director and film critic Uygar Şirin, and director-producer Zeynep Koray. After writing and directing “Nobody’s Home”, which international premiered at Venice and won multiple national and international awards including Best Film and Best Screenplay, Deniz Akçay designed the Netflix period drama series, “The Club”, and wrote and directed a remake of “The Affair” as a series for BluTV. Earning writing credits for “Mixed Pizza”, “The Voice” and “My Mother’s Wound”, Uygar Şirin co-wrote and directed the two award-winning short films, “Birth” and “Death”, as well as writing a screen adaptation of his eponymous novel, “Mixed Tape”. The director and/or producer of films such as “A Day, 365 Hours”, “A Cold Year”, “Empire of the Rabbits”, “The Pigeon”, “The Corridor” and “The History of Arabesque Music in Turkey”, Zeynep Koray is the co-founder of Kulefilm and founder of ZKF, a production company focusing on independent fiction and documentary films.

Now in its third year, the Series/Short Series Pitching Platform was launched to reflect the growing role and importance of series in the audiovisual industry. The five projects selected this year will pitch to jury made up of: Julia Schulte, Senior Vice President of International Sales at France TV Distribution, whose catalogue includes popular French drama series “Call My Agent” (which was remade in Turkey) and multi-territory-selling documentary series “Apocalypse: War of the Worlds”; Leticia Godinho, Head of Business Development at Series Mania Forum, a major event for European TV industry professionals held annually in Lille; and Yamaç Okur, a founding partner of FARO — a company seeking to create high-quality TV and film content in Turkey and emerging markets — and a board member of the Turkish Film Producers’ Association (SE-YAP) who has produced over 200 TV series episodes for Ay Yapım, in addition to several independent films.

This year’s Antalya Film Forum winners will be announced at a ceremony on October 4!

Launched last year as an extension of the Antalya Film Forum, Forum+ will be held physically and online between October 2-6 and include a line-up of workshops, masterclasses and talks.

French-American actor-director-producer Jean-Marc Barr and Turkish actress-producer Damla Sönmez will talk about their acting experience in the USA, Europe and Turkey in a masterclass moderated by experienced American writer-film critic Deborah Young on October 3.

On October 4, Armağan Lale will moderate a talk titled “Series Case Study: The Club”, in which producer Ayşe Durmaz, writer Rana Denizer and screenwriter-director Zeynep Günay Tan will give first-hand accounts of the writing, creation and production process involved in “The Club”, a period drama series for Netflix Turkey.

From October 5 onward, Forum+ events will take place online only. On October 5, producer Burcu Melekoğlu and IDFA Film Markets Manager Selin Murat will lead a workshop titled “Putting Together International Market Applications for Documentaries”. The same day, producer Emine Yıldırım will share her experience in a talk on “Budgeting from A to Z”.

Finally, on October 6, co-founder of Başka Sinema Marsel Kalvo and Deputy Senior Vice President of International Sales at France TV Distribution Renan Artukmaç will discuss their thoughts on identifying target audiences and building a bridge between audiences and filmmakers in a talk titled “Who Is My Audience?”. Separately, script editor Christian Routh will give the lowdown on building effective and agreeable relationships with experienced script doctors in a session on “Working with a Script Consultant”.