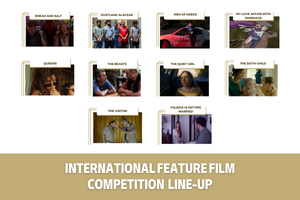 The line-up and jury for the International Feature Film Competition of the 59th Antalya Golden Orange Film Festival have been announced. The 10 selected films will be competing for Golden Orange statuettes in the Best Film, Best Director, Best Actor and Best Actress categories. Due to begin on October 1, the Festival is hosted by the Mayor of Antalya, Mr. Muhittin Böcek, with the support of the Turkish Ministry of Culture and Tourism.

Throughout her career, the Romanian stage and screen actress, Anamaria Marinca, has won recognition for her performances in both arthouse films and blockbuster studio productions. She has appeared in award-winning films such as Sex Traffic (2005), 4 Months, 3 Weeks and 2 Days (2007) and Nico, 1998 (2017), and most recently starred in the horror drama, You Won’t Be Alone, which premiered at the 2022 Sundance Film Festival.

With over 25 years of experience as a film curator and critic, Nikolaj Nikitin spent many years as a programmer for the Berlin Film Festival. He co-founded the School of Film Advancement (SOFA), where he now serves as head of studies, is a curator for the Tallinn Black Nights Film Festival and the artistic director of the Palic European Film Festival.

Olivier Père began his career as a programmer at the Cinémathèque Française - Museum of Cinema in Paris, where he worked from 1995-2009. He wrote for Les Inrockuptibles and various other publications as a film critic between 1997 and 2012, and in between times served as artistic director of the Cannes Directors’ Fortnight from 2004-2009. He was appointed artistic director of the Locarno International Film Festival in 2009, and has been an executive director of Arte France Cinema and director of film acquisitions for Arte France since 2012.

Born and based in Iceland, director and screenwriter Valdimar Jóhannsson was shortlisted for an Academy Award and Best International Feature Film BAFTA with his debut film, Lamb, which starred Noomi Rapace in the lead. The film premiered in the Un Certain Regard section of the 2021 Cannes Film Festival, where it won the Prize of Originality. Jóhannsson has worked in multiple different departments on films and series that include Rogue One, The Tomorrow War and Game of Thrones.

The 10 films selected for the 59th Antalya Golden Orange Film Festival International Feature Film Competition are productions from Belgium, Bolivia, Bulgaria, France, Iran, Ireland, Israel, Latvia, Luxembourg, Morocco, the Netherlands, Poland, Romania, Spain, the United States and Uruguay. They have all screened at leading world festivals such as Venice, Fajr, Sarajevo, Tribeca and Berlin and will all be premiering in Turkey at the Festival.

Among the eagerly awaited titles of the line-up, Léopold Legrand’s The Sixth Child tells the story of an unthinkable arrangement between a financially struggling couple whose sixth child is on the way and another couple who can’t have children. Premiering at San Sebastian, Rodrigo Sorogoyen’s The Beasts explores the aggression shown by villagers toward a couple who move to the countryside to be close to nature. Bread and Salt, which won director Damian Kocur the Horizons Special Jury Award at Venice, addresses the themes of violence and immigration through the story of a young musician returning to his hometown for a vacation. In her animated drama, My Love Affair with Marriage, which premiered at Tribeca, Signe Baumane takes a lighthearted look at a woman’s growing inner rebellion. Screening in competition at Sarajevo, Paul Negoescu’s Men of Deeds takes up the story of a village policeman who inadvertently becomes involved in a series of violent events. Dustland, which won writer-director Kazem Daneshi Best Screenplay Award at the Fajr Film Festival, deals with the dilemma facing a prosecutor when he has to preside over a case involving the local mayor. Yasmine Benkiran’s Morocco set Queens follows the story of two women and a girl on the run and the police on their tail. In the Quiet Girl, which picked up Best Feature and Special Mention of the Children’s Jury in the Generation Kplus section of the Berlinale, director Colm Bairéad portrays a quiet, neglected girl sent to stay with distant relatives for the summer and the bond she slowly begins to forge with them. Michal Vinik’s Venice screener, Valeria Is Getting Married, is an unsettling drama that exposes the complexities of arranged marriage through the story of two Ukrainian sisters moving to Israel for an easier life. And finally, Martín Boulocq’s Tribeca Best Screenplay winner, The Visitor, offers a thoughtful reflection on the increasingly dominant presence of Evangelism in Latin America and the new forms of ideological dependence guiding Bolivian society.

The winners of the International Feature Film Competition will be announced at the Festival’s Closing and Awards Ceremony on Saturday, October 8.