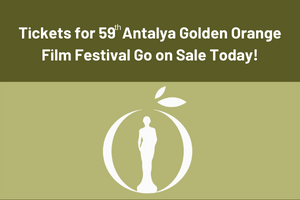 Hosted by the Antalya Metropolitan Municipality with the support of the Turkish Ministry of Culture and Tourism, the 59th Antalya Golden Orange Film Festival will run from October 1-8, 2022 with a bumper line-up of eagerly anticipated films. The program is divided into three sections — the Competitions, Another World and Special Screenings — and all competition titles will be screening in Turkey for the first time in Antalya.

As every year, the Festival is continuing its support for the Turkish film industry through the Antalya Film Forum, and for future filmmakers through the Golden Orange Film School. The Festival also continues to innovate and in so doing to enhance its 59-year legacy. New this year are the Adapted Screenplay Competition, an initiative to bring powerful scripts to Turkish cinema, and the New Generation Film School, which supports young women students aspiring to make a career in film. The Festival will be presenting 66 films by 74 directors from 33 countries. Tickets will be sold via biletix.com.

This year’s Festival screenings will take place in the AKM (Atatürk Cultural Center) Aspendos and Perge Auditoria and the Doğu Garajı Cultural Center Auditorium, as well as the two open-air cinemas, Under the Stars 1 (Old Atatürk Stadium in Karaalioğlu Park) and Under the Stars 2 (behind the AKM Doğan Hızlan Library).

Festival tickets will be available from 13.00 on 24 September (today) via biletix.com. They can also be purchased at Biletix ticket stands in the AKM from Tuesday, September 27. Admission to all Short Film and Documentary screenings in the AKM Perge Cinema, and the two showings of Charlie Chaplin’s The Kid will be free of charge.

Festival tickets are priced at TL 5 for adults and TL 3 for students. Premiere screenings of National Feature Film Competition films held at 14.30 and 17.00 in the AKM Aspendos Auditorium will be attended by members of the cast and crew. There will be Q&A sessions with the filmmakers after the screenings in the AKM Balerin Café.

National Documentary and Short Film Competition screenings in the AKM Perge Auditorium will be followed by Q&As with cast and crew members in the auditorium.

Outstanding Films of the Year Bound for Antalya in “Another World”!

Besides the Golden Orange buzz surrounding the National and International Competitions, the Festival program also promises a selection of award-winning films from the world’s top festivals in the “Another World” section.

Among the 11 films that will be shown, Park Chan-wook’s Decision to Leave, which picked up Best Director award at the 2022 Cannes Film Festival, tells the story of a detective in love with the suspect in a murder case he is investigating. Aftersun, the debut feature from Charlotte Wells which screened at Cannes, is the poignant portrayal of a father-daughter relationship. In his Cannes Grand Prix winner, Close, Lukas Dhont highlights the importance and precarity of childhood friendships. Directed by Chie Hayakawa, Japan’s Foreign Language Academy Award submission Plan 75 is set in the near future when the government launches a scarcely conceivable program targeting the elderly population. Patricio Guzmán’s documentary, My Imaginary Country, showcases the protests that exploded onto the streets of Chile’s capital, Santiago, in 2019 as the population demanded more democracy and social equality around education, healthcare and job opportunities. The Cannes Critics’ Week screener Everybody Loves Jeanne from director Céline Devaux focuses on a woman who runs into a former high-school friend at a time when everything in her life is going wrong. Presented at the Locarno Film Festival, Alain Ughetto’s animated feature, No Dogs or Italians Allowed, tells the story of a family who emigrate from Italy to France for a better life. Co-directed by Riley Keough and Gina Gammell, War Pony follows the interlocking stories of two Native American young men growing up on the Pine Ridge Reservation. Kore-eda Hirokazu’s Broker, which won Song Kang Best Actor at Cannes for his performance in the starring role, centers on a gang of two who sell babies lifted from the baby box at a neighborhood church. And Other People’s Children, the latest film from Rebecca Zlotowski which screened in competition at Venice, brings a different perspective to the idea of parenthood through the relationship a childless woman builds with her boyfriend’s young daughter.

Separately, in tribute to the memory of Jean-Jacques Sempé, the cartoonist behind the “Le Petit Nicolas” series who died earlier this year, there will be two screenings of Little Nicholas - Happy as Can Be, an animation co-directed by Amandine Fredon and Benjamin Massoubre.

The 2022 Festival program also includes two timeless classics: the David Lean epic historical drama, Lawrence of Arabia, and Charlie Chaplin’s The Kid. The seven-Oscar-winning Lawrence of Arabia, which focuses on the life of British spy T.E. Lawrence as he rallied Arab tribes to fight the Ottoman Turks in World War I, is recognized as one of the most important films in cinema history. Banned by the censors, the 1962 production has never screened in cinemas in Turkey, but a digitally restored 226-minute copy of the director’s cut will be shown at the Festival. The 1921 film, The Kid, Charlie Chaplin’s first feature, is an unforgettable classic. Restored in 2021, the comedy will be on offer to both children and adults.

There will also be special screenings of four new Turkish documentaries. In Memoirs of a Physician, director Biket İlhan chronicles the life and work of Dr. Besim Ömer (Akalın), a gynecologist whose contributions to the modernization of Turkish medicine and to women’s lives generally were notable. Directed by Mehmet Güreli, Once Upon a Time Yeşilçam - Abdurrahman Keskiner paints a portrait of the veteran Turkish producer, Abdurrahman Keskiner. İlke İşisağ’s Ms. Leyla sheds light on the life of Leyla Atakan, the very first female metropolitan mayor in Turkey. And in Narperi’s Bracelet, Jale İncekol follows the journey of non-professional women in a handicrafts workshop as they discover their strengths.

The Festival’s out-of-competition program presents Guilt, the debut feature from award-winning documentarist Ümran Safter, and Suna, the latest film by Çiğdem Sezgin, who made a splash with her first feature, Wedding Dance (2015). Suna tells the story of a woman trying to survive in a male-dominated world, while Guilt is centered around a 13-year-old girl slipping into adolescence.