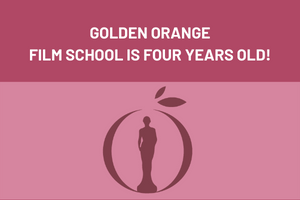 The Golden Orange Film School, the part of the Antalya Golden Orange Film Festival that brings young filmmakers together with film industry professionals, celebrates its fourth birthday this year. The Festival, now in its 59th edition, is hosted by Mayor of Antalya Muhittin Böcek with the support of the Turkish Ministry  of Culture and Tourism and runs from October 1-8, 2022.

Launched in 2019 under the banner “Let the young create, let Antalya flourish with the young!” the Golden Orange Film School aims to support the filmmakers of the future. Having so far provided instruction to 650 students, the Film School will be held online from October 2-7.

The Golden Orange Film School classes will this year bring students together with filmmakers from different disciplines within the industry. Beginning with a class on “Short Film Production” from director-screenwriter and film critic Burcu Aykar, the program will continue with the following sessions: a “How to Read a Film Workshop” with film critic Aslı Ildır; a “Creative Documentary Workshop” with producer-director and consultant Zeynep Güzel; “Color Correction in Film and Television” with Levent Öztürk, the founder of Soft Light Color Grading Service; “Film Without a Camera” with director-screenwriter and multimedia artist Deniz Tortum; “Working with Stock Footage” with video artist and film director Köken Ergun; and “Building a Screenplay” with director-screenwriter Ali Vatansever.

As part of the Golden Orange Film School program, there will also be a screening of “Watching the Shadow: Controversial Firsts in Turkish Cinema”, a documentary directed by Müjgan Yıldırım with Burçak Evren advising. The screening will be followed by a Q&A between students and the filmmakers.

Golden Orange Film School to Connect with Film Enthusiasts Across Turkey through Conversations!

As always, the Golden Orange Film School is organizing a series of conversations and interviews with top filmmakers that will be accessible not only to selected students, but to film enthusiasts the length and breadth of Turkey.

A conversation with director Nazlı Elif Durlu that could be a useful guide to young filmmakers will be broadcast on October 2. Titled “How I Made My First Film”, the session is moderated by Sezen Kayhan.  Another conversation on “From Literature to Cinema” with guest Ayfer Tunç and moderator Burak Göral, and a chat titled “Conversations with Directors” between Evrim Kaya and director-screenwriter Tayfun Pirselimoğlu can be watched via the Festival’s social media accounts on October 3 and 4, respectively. In a tie-up with the Antalya Film Forum on October 6, Yalın Özgencil, Cenk Erol and Cem Taşkara will come together for a conversation on “Post Production Processes” moderated by Armağan Lale. And on October 7, Müge Turan’s conversation with Ahmet Mümtaz Taylan titled “On Acting” will go out on air. These conversations will be broadcast every day at 14.00 on the Festival’s YouTube account.