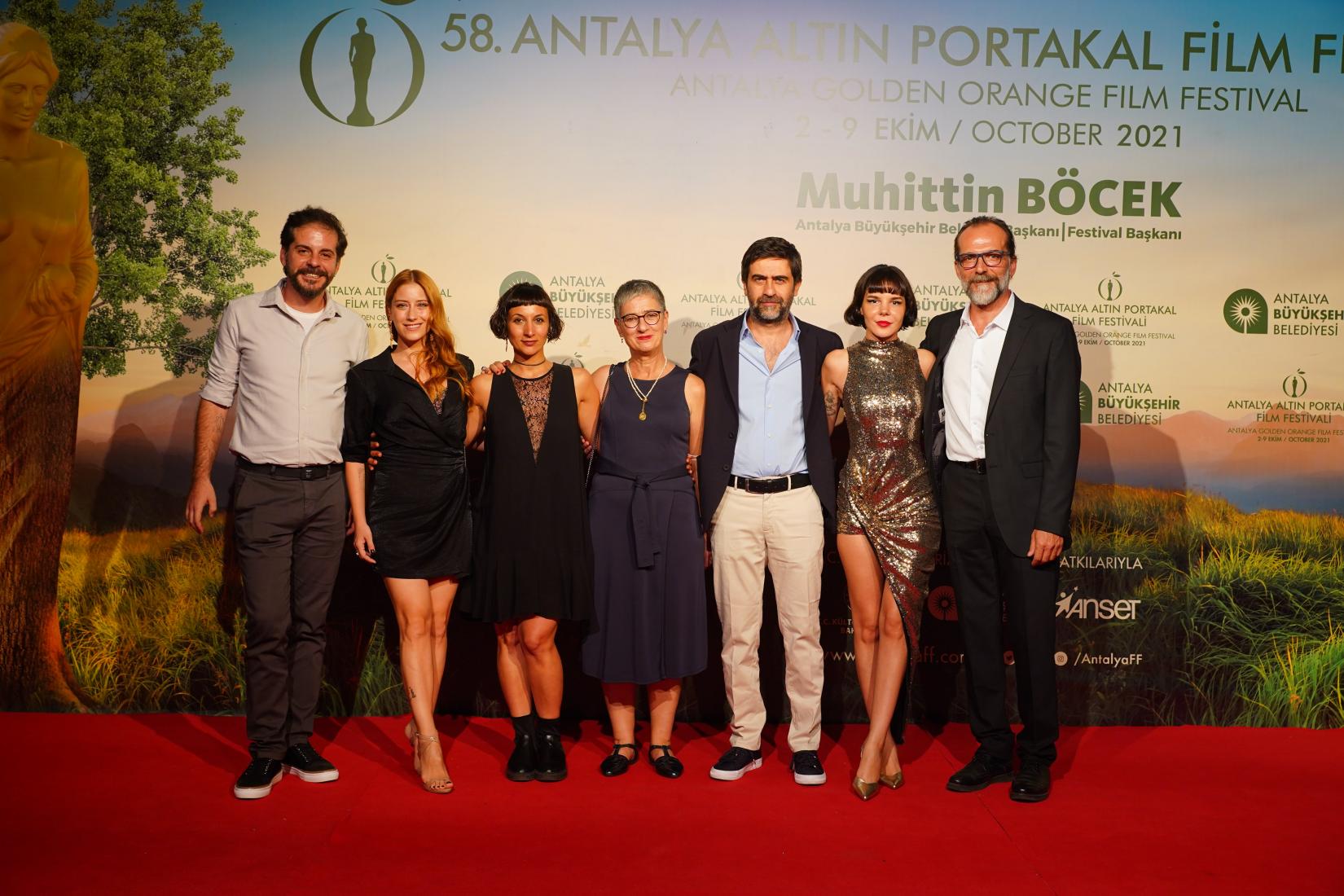 The 58thAntalya Golden Orange Film Festival has come to an end following the Closing and Awards Ceremony. The Festival’s Best Film was Brother’s Keeper (Okul Tıraşı), directed by Ferit Karahan.

Hosted by the Municipality of Antalya with the support of the Turkish Ministry of Culture & Tourism, the 58thAntalya Golden Orange Film Festival has officially ended with a ceremony held at the Antalya Indoor Sports Complex.

In the speech he made, Muhittin Böcek, the Mayor of Antalya and Festival Chairman, said: ‘Having prepared for the Festival in the shadow of the pandemic with the additional anguish of this summer’s terrible forest fires, the event has given us renewed hope and strength. As a beacon of Turkish cinema, the Golden Orange and its long legacy have once again lit up Antalya and the country as a whole. Meeting with our treasured filmmakers and film enthusiasts has buoyed us all. We have had the joy of creating some memorable moments together at the Festival, which has set us firmly on the road to recovery, allowing us to reinforce the good things and look to the future with optimism. And together we will keep this sense of joy alive. Today, the Golden Orange will rise up in the hands of filmmakers for the 58th time. I congratulate all filmmakers who’ll be receiving awards tonight.’

When it came to his speech, the Minister for Culture & Tourism, Mehmet Nuri Ersoy, said: ‘I would like to begin by saying how happy I am to be with you at the International Antalya Film Festival, one of the country’s leading arts and cultural events. As Mustafa Kemal Atatürk once pithily remarked, ‘A society without the arts is deprived of one its life sources.’ Taking inspiration from this statement, I should say that it is our primary responsibility to nurture this life source of our society. As the heirs to a time-honored civilization, we have many more great and powerful stories to tell. I believe with all my heart that we will achieve this thanks to the vast reserves of imagination and artistic skills of you, our treasured filmmakers.’

This year, 10 films screened in the National Feature Film Competition for awards in 14 categories worth a total of TL770 thousand. Screenwriter, director, producer and academic, Emin Alper, chaired the jury whose other members were: the cinematographer, Ahmet Sesigürgil, the screenwriter, Ayfer Tunç, the singer, songwriter, composer and producer, Gaye Su Akyol, the actress, Hazal Kaya, the director, instructor and actor, Muhammet Uzuner, and screenwriter, Senem Tüzen. Collectively, the jury awarded Best Film to Ferit Karahan’s Brother’s Keeper (Okul Tıraşı). Announcing the award, Emin Alper cited the jury’s reasoning in the following statement: ‘We are giving the award to the film, Brother’s Keeper, for its powerful and convincing critique of a system where children are stringently homogenized, for telling its story in a profoundly lucid and eloquent way without resorting to melodrama, and for its superb acting performances.’

The Best Director Award was given to Tayfun Pirselimoğlu for his latest film, Kerr. In announcing the award, the jury commended the film ‘for building a dystopian atmosphere that fuels a deep sense of fear and unease, for its subtle interplay of cinematography and art direction, and for its impressive and meticulous use of cinematic tools’.

The Best Actress Award was given to Nihal Yalçın for her performance in Zuhal, and the Best Actor Award to Tarhan Karagöz for his role in The Cage (Kafes).

The TL50 thousand Cahide Sonku Award was inaugurated the year before last in memory of the Turkish actress, Cahide Sonku, to raise the profile and visibility of women working in the Turkish film industry. This year’s winners were named as Ezgi Baltaş, the casting director of Between Two Dawns (İki Şafak Arasında) and the film’s assistant producer, Feride Çiçekoğlu.

The 9 films shortlisted for the National Documentary Film Competition were assessed by a jury comprising the filmmakers, Didem Pekün, Pelin Esmer and Pınar Öğünç. The Best Documentary Film was awarded to Volkan Üce’s All-In (Her Şey Dahil), ‘a film which stands out for its thorough exploration of the central characters, for broadening out the grind of work, the search for equality, the questioning of meaning from the world of the characters into an ultimately human issue, and for its subtle cinematic language’.

The Special Jury Award was given to Aslı Akdağ’s documentary, Expecting a Grain of Sand (Bekleyiş) on the following grounds: ‘Good documentaries are born of courage. Being a single mother in a conservative community is tough in its own right. But the director, who portrays herself as the subject of this experience shows even greater courage.’

Before announcing the awards, the jury noted that one of the documentaries they had been impressed by deserved special mention. As they went on to explain: ‘This is the story of a single woman who leaves for Germany with the first convoy of Turkish migrant workers and of her family, broken apart by migration but later reunited. Didem Şahin’s Bittersweet (Acı ve Tatlı) takes us on a bittersweet journey through the passageways of a blurring memory.’

The 12 titles selected for the National Short Film Competition were considered by a jury composed of Onur Saylak, Öykü Karayel and Tunç Şahin. Elif Refiğ’s I’ll Leave You Two Alone (Siz Biraz Uzak Kaldınız) was named Best Short Film‘for a narrative that confounds the audience’s expectations at every turn and for telling its story, which examines the identity and values of its characters, with a polished and powerful cinematic language’.

Ali Tansu’s The Second Night (İkinci Gece) came away with the Special Jury Award‘forits impressive acting direction, for creating an original and powerful visual world, and for skillfully crafting a new language through courageous cinematic choices’.

The jury also gave a special mention to Rewsen (Rewşen), a short directed by Musab Tekin, ‘for using the camera to take us on a journey into the minds of the characters and made a powerful emotional impact on the audience through its original, stripped-down narrative’.

A jury chaired by the Polish director, DorotaKędzierzawska, and made up of the Palestinian actor, Ali Suliman, the Swedish journalist and film critic, Eva af Geijerstam, the French producer, Guillaume de Seille, and the Bulgarian actor, Margita Gosheva, judged the 10 films screening in the International Feature Film Competition, who awarded Best Film to Clara Roquet’s Libertad. Announcing the award, the jury stated: ‘The Best Film Award goes to a film that describes the problems of both young people and old with powerful nuances. This coming-of-age story also gains from the strong performances of the cast. The award goes to Clara Roquet’s film, Libertad.’

The jury gave the Best Director Award to Paz Fábrega, the director of Aurora, for ‘her cinematic skill and simplicity in bringing to the screen the many different aspects of womanhood with depth and subtlety’.

The Best Actress Award was taken by Claudia Grob for her performance in The Fam. In announcing the award, the jury noted: ‘The Best Actress delivers a hugely heartfelt performance and solemnly keeps it up through the entire film. The award goes to Claudia Grob for her profound portrayal of the emotional confusion experienced by the character she plays in the film, The Fam.’

Finally, the Best Actor Award went to Petri Poikolainen for his role in the film, The Blind Man Who Did Not Want to See Titanic. In its statement, the jury observed: ‘The winner of the Best Actor Award gives us a powerful lesson in acting. Seamless communication between the director and actor enables us, the audience, to vividly experience the journey of a disabled character.’

The Blind Man Who Did Not Want To See Titanic

EXPECTING A GRAIN OF SAND / BEKLEYİŞ